Recently a Sydney criminal lawyer was awarded $40,000 compensation after NSW Police wrongfully arrested her. And her crime? 57-year-old Andrea Taylor was accused of taking a photo of two police officers while they were doing a random train inspection on her way to a bushwalk at the Royal National Park. They apparently detained her at Kogarah Station in front of onlookers for some 30 minutes. Later when Taylor complained of the incident at the cop shop, officers recorded the incident as her committing a terrorist act.

You can read about it all in the Sydney Morning Herald here. Though I wonder, looking at Ms Taylor’s photograph, whether she fits the profile of a terrorist. As we all know, terrorists are supposed to fit a certain profile. They’re meant to look rather Middle Eastern and have names like Isa bin Maryam (or “Jesus son of Mary”, for the linguistically challenged).

Maybe if Ms Taylor looked somewhat different or wore one of those Darth Vader hats on her head, she might have been more easily arrested for a terrorist offence as soon as she was arrested. And no doubt some in our media would have facilitated the arrest being as soon as culturally reasonable in the public eye.

The fact is that there is no agreed definition of terrorism. The more intrusive anti-terror laws become, the more their enforcement relies on profiling. Just as John Howard introduced his draconian laws in September 2005, the President of the Police Federation of Australia issued a statement confirming that certain groups (he collectively identified them as “Muslims”) would be directly affected by enforcement of the new laws. The Federation even called upon the government to legislate so that police officers were indemnified for civil action.

The practice of racial profiling has become so absurd that it affects even the most prominent individuals. If you don’t believe me, imagine this scenario.

You’re a foreign-looking brown-skinned bloke who shows up to an international airport in New Jersey in the United States. You front up to customs and immigration. The officer can’t quite figure out whether you’re Middle Eastern, Afghan or Indian. He asks who you are. You show him your Indian passport. He then addresses you.

“Mr Khan. What brings you to the United States?”

“I’m here for a community function and a shooting.”

Now of course, if the immigration officer was a regular consumer of Rupert Murdoch’s Fox News and a regular reader of Mr Murdoch’s New York Post, he’d almost certainly assume your surname and your wish to engage in some “shooting” were somehow linked and would detain you for some time. But what if you were the biggest megastar in the world’s biggest film industry? And what if the thing you were shooting wasn’t innocent Americans but rather a movie whose rights have been bought by one of Mr Murdoch’s companies?

Shah Rukh Khan (popularly known as “King Khan” or “SRK”) is more than just a huge Bollywood star, movie producer and host of India’s Kaun Banega Crorepati (literally meaning “Who Wants To Be A Millionaire Ten Times Over”). He is the recipient of numerous Indian and international honours including the ‘Officier dans l’Ordre des Arts et des Lettres’ (Officer of the Order of Arts and Letters) by France in 2007. SRK is also a cricket entrepreneur, and owner of the Kolkata Knight Riders that includes Australian international players Ricky Ponting and David Hussey. And like all true celebrities, SRK can be found greeting admirers at Madam Tassauds.

But all that meant nothing to the immigration dudes at the ironically named Liberty International Airport in Newark where SRK was detained and questioned for around two hours. He interpreted it as a case of profiling based on his surname. The Indian government was furious. This surely must affect millions. Khan is among the most common surnames of South Asian Muslims. Prominent Khans include a former Pakistani cricket captain (Imran) and the Secretary General of Amnesty International (Irene).

The irony of all this is that Khan’s next movie is entitled My Name Is Khan and is based on the true story of an Indian Muslim man suffering from Asperger Syndrome who is detained in the United States and deemed to be a terrorist due to his “suspicious” behaviour. Such a diplomatic incident is priceless publicity for the film. And Newscorp, whose Fox News channel helps create a climate that makes such profiling inevitable, will now benefit from the added publicity given to a movie that seeks to counter it. 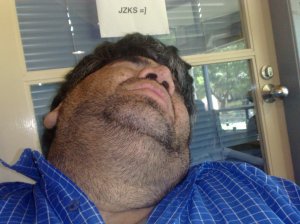 Reading that sure put me to sleep.

A year ago, more than 50 people were killed in a terrorist attack on London’s public transport system. The attack represented a turning point in the international struggle against terrorism.

All evidence points to the attack being the work of disillusioned and frustrated children of nominally Muslim migrants. These young men found themselves in what Australian Treasurer Peter Costello described in a February speech to the Sydney Institute as “a twilight zone where the values of their parents’ old country have been lost but the values of the new country not fully embraced”.

The attacks led to assaults on Muslim targets across the Western world, including vandalism on several mosques across New Zealand. These assaults represented extreme expressions of understandable fears and concerns of ordinary non-Muslim citizens.

Muslim institutions, dominated by first-generation migrants with poor English-language skills and limited understanding of media and government processes, found themselves unable to allay the fears of their fellow citizens.

The phenomenon of “home-grown terror” has seen a fundamental rethink by governments and security services of how the war against terror has been fought. Western governments are seeing engagement of Muslim communities (especially youth) as a security imperative.

The difficulties government and media face in understanding Muslim views arise from a number of factors. Unlike other faiths, Muslims have no priesthood and no central hierarchy. There is no such thing as a Muslim “church”.

In Australia, the Howard Government has been forced to set up a special Muslim Community Reference Group under the auspices of its Ministry of Multicultural Affairs. The group is composed of the usual middle-aged male leaders. However, the government has also recruited women and young people.

Yet the presumptions underlying the establishment of the group underscore the government’s relative ignorance of a faith community that makes up hardly two per cent of the population. According to a government website, the group is “among a series of initiatives which will assist Australia’s Muslim communities to build a common future with all Australians”, as if such a common future has not been built in over 150 years of Muslim presence in European Australia.

“Home-grown terror” has triggered many conservative commentators (and even politicians) to call for a new cultural revolution. Liberal democratic values are being reinterpreted in a manner which, if implemented, would hand victory to the terrorists themselves.

This conservative revolution seeks to displace decades of multicultural status quo embraced by many Western democracies. Like all revolutions, the conservative counter-culture is based more on myth and perception than reality. To understand the extent of the fiction involved, it is appropriate to focus on one victim of the London bombing.

Costello’s twilight zone did not describe the lifestyle of this young English bank clerk. The smile of her published photo elegantly represented a woman at peace with her Islamic heritage and her British nationality.

For Shahara Islam, 21, having the surname and religion of Islam did not diminish her Britishness. Indeed, her family described her as being “an East Ender, Londoner and British, but above all a true Muslim and proud to be so”.

She represented a modern multicultural success story – the daughter of migrant parents whose religious and cultural heritage she shared. At the same time, she was a thoroughly modern woman on her way to work.

She was a typical victim of terrorism. Presidents and prime ministers speak of the “war against Islamist terror” in her name. Columnists and talkback hosts rally against “Islamic terrorists” in her name. Yet they keep forgetting what her name is.

In neo-conservative circles, it has become fashionable to attribute extremist violence and terror to the heritage of the young British bank clerk. This has become apparent in a number of neo-conservative publications, including the New Zealand-based magazine Investigate.

This month, the allegedly liberal Centre for Independent Studies hosts Mark Steyn as part of its “Big Ideas Forum”. Steyn’s most consistent big idea involves blaming Muslim cultures for virtually all the ills of the world.

Writing in the UK Sunday Telegraph (and reproduced in Rupert Murdoch’s The Australian), Steyn says: “These days, whenever something goofy turns up on the news, chances are it involves a fellow called Mohammed.”

Two recent government appointees to the government-funded ABC Board have made similar claims about the existence of a monolithic Muslim “culture”, one even going so far as to suggest this culture encourages its male proponents to sexually assault white women.

On June 26, ex-Australian media mogul Rupert Murdoch spoke in terms of a monolithic Muslim culture which allegedly placed religion above nationalist sentiment. Murdoch’s chilling words were: “You have to be careful about Muslims who have a very strong, in many ways a fine, but very strong religion which supercedes (sic) any sense of nationalism wherever they go.”

His sentiments have been mirrored in the editorial line taken by virtually all his newspapers whose op-ed pages are frequently used to promote a European monolithic counter-culture as an alternative to the multicultural status quo.

With such powerful media and government forces busy edu-hating their religious heritage, how do the majority of moderate home-grown Muslims avoid being marginalised? A key plank of the solution is for young home-grown Muslims to take over peak Muslim bodies claiming to represent them.

When ordinary citizens know the facts about their Muslim neighbours, when Islam is no longer seen as alien, the hysteria will hopefully end. But when Muslims living in the West allow themselves to become marginalised in cultural cocoons, and when they become second-class citizens, groups like al-Qaida will find recruitment much easier.

(published in The Press of Christchurch on 7 July 2006)